EIGRP is an 'advanced' distance vector routing protocol and is the evolution of IGRP. Originally EIGRP was a Cisco proprietary protocol but in 2013 Cisco announced its intention to make EIGRP on open standard. At the time of writing there is an only informational RFC: RFC7868.

EIGRP has been assigned protocol number 88 and implements its own reliable transport protocol for delivery of unicast and multicast packets. It does not use TCP or UDP.

There are 6 K coefficient values used in the EIGRP metric calculation. Bandwidth (K1), load (K2), cumulative delay (K3), reliability (K4), MTU (K5) and extended metrics (K6). There is also a hop count parameter but that is used to prevent routing loops, not for best path selection.

K1-5 + hop count are considered to be the EIGRP classic metrics. EIGRP was further enhanced to support so called wide metrics. Wide metrics accommodate for interface speeds greater than 10G. Additionally the K6 coefficient was added and bandwidth is referred to as throughput while delay is referred to as latency.

Essentially the default metric is calculated as follows:

For reference the full calculation for both classic and wide metrics are below: 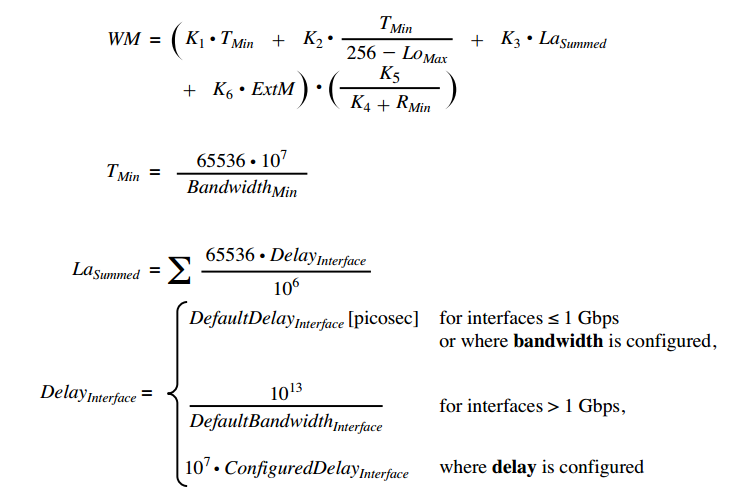 Cisco does not recommend turning on any of the non-default metrics and most of them exist for backwards compatibility with IGRP. The recommended method to influence best path selection is by altering the delay metric.

For an EIGRP neighborship to be established the following must be true.

EIGRP has 7 types of neighbor packets.

Reliable transport protocol (RTP) ensures that EIGRP packets are not only delivered, but also delivered in the correct order. There is no separate RTP packet format, instead RTP is build into the EIGRP messages using sequence numbers and forced acknowledgements. The reliable EIGRP packets types (Update, Query, Reply, SIA-Update and SIA-Reply) must be acknowledged, this ensures the delivery of EIGRP messages.

Diffusing Update Algorithm (DUAL) is used as the convergence algorithm in EIGRP. DUAL replaces the Bellman-Ford algorithm used in other distance vector protocols. DUAL computes the shortest path using the concept of "diffusing computations" to ensure a loop free topology during the shortest path computation.

During a topology change, if the shortest path provided by a neighbor is not a feasible successor, the router will commence a diffusing computation by sending a Query packet to its neighbors with the prefix and its computed distance to the destination.

The DUAL Finite state machine (FSM) is used to use handle multiple topology changes during a single diffusing computation.

DUAL uses the following parameters in the diffusing computation.

Any loop free path to a destination will be installed in the topology table as one of two types of routes.

Routes in the topology table go through a number of states.

EIGRP exchanges a full routing table when a neighborship is initially established with only partial updates exchanged after that. For a router to accept routing updates from a neighbor the router-id must be different to its local router-id.

EIGRP is a classless routing protocol and can summarize networks at any bit boundary.

EIGRP supports both MD5 and SHA-256 authentication. SHA-256 is only available in EIGRP named mode.